The Halfway Cafeteria was located off the A.20 opposite the Mayfield Nursery on the land which is now Downlands. The Café had various names previously being known as ‘The Hermitage’ when it was built in the 1920’s, ‘The Rendezvous‘ from 1953 to the early 1960’s when it became ‘The Rose of Killarney’ this was run by Jimmy McCarran and his wife Betty with help from their daughter ‘Young Bette’. 1969 saw another change of ownership when it was taken over by Pat and Derick Welsh and it became ‘The Halfway Cafeteria’ They had two sons, David and Ian who both attended Harrietsham Primary School and Swadelands, Pat was a regular visitor to the village shops and the Post Office. Pat’s mother Laura worked in the café with a number of other part time ladies from both Harrietsham and Lenham. and although Pat couldn’t remember all of their names she recalled there being Kathy Martin, Joan from Lenham and Daphne Wood? who she thought lived in Church Lane and Banger Wood who regularly did odd jobs for them.

Pat recalled the café being regularly used by the Northdown Motor Cycle Club which was formed in Harrietsham in 1980 with just 16 members male and female who held their meetings in the bar area. The café was also used by the Kent Chapter Hells Angels who held their Custom Bike Show there for about four years, about 400 people attended the first year and almost 4000 four years later. The bikers camped wherever they could find space including on Mayfield Nursery and the adjoining land, the café was open all hours over Friday—Sunday whilst the event was on. Pat recalled there was never any problems or trouble with these events despite the premises having an alcohol licence. Pat also remembers a number of celebrities visiting the café during the eighties, Jack Warner and family stopped in for tea one afternoon, Steve Strange, the lead singer of the Pop Group Visage was filmed there, and 2 episodes of the TV police series ‘Cats Eyes’ were filmed there starring Leslie Ash & Jill Gascoigne. The Hells Angels raised money and organised several Christmas Parties for the elderly in the village and one of them even collected one lady, Mrs Heathfield on his three wheeler motorcycle to make sure she could get to the party. Nicky Steel from Church Crescent took his mobile disco to the Christmas Parties dressed up as Elvis. The café was a regular stop off for coaches with the staff supplying cream teas and bread pudding for the visitors. On one occasion George Hamilton IV pulled into the carpark with a huge trailer and his entourage for breakfast and asked if they could have pancakes, which were duly supplied. In the summer Boot Fairs were held regularly on the Car Park. Pat, Derick & family ran the Halfway Cafeteria until 1989.
The history Society thanks Pat Highstead (Welsh) and Bob Lurcock for recalling their memories of the café and to Rusty (Brian Rust) for finding the souvenir bag from the café. Bob Lurcock and his wife June were founder members of the Northdown Motor Cycle Club which carried on up to early 2000 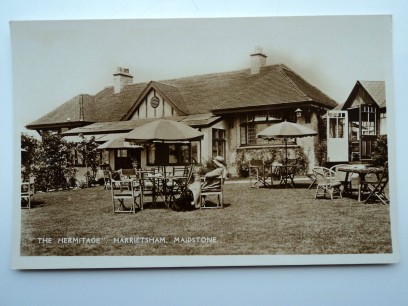